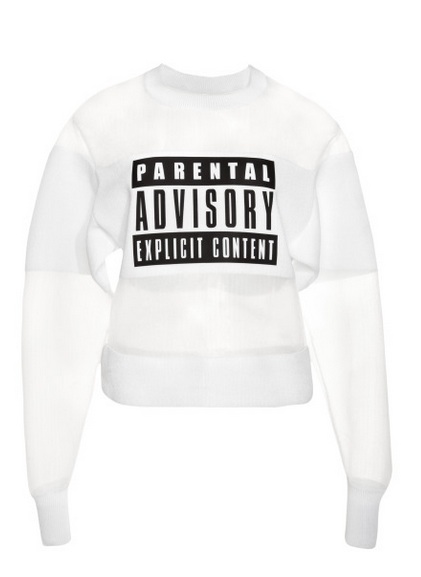 During the course of the last week or so, we’ve been talking an awful lot about Alexander Wang‘s Parental Advisory sweatshirt, which we first spotted on the runway at the designer’s Spring 2014 show during New York Fashion Week.

First, we highlighted the fact that a similar style has been available at Urban Outfitters for months (at a mere $46), and then pointed out that Rihanna was already spotted rocking the next-season piece. One thing we didn’t know until now: the price tag.

We had a feeling the price tag was going to be hefty—it is Alexander Wang after all, and the top has “status item” written all over it—but we were actually pretty shocked to find out that it costs almost $1,000.

The sweatshirt—which is unlined, and is made from a mix of rayon, cotton, and nylon—is available for pre-order on Moda Operandi, which lists it at $998 (Interested? You’ll  need to give a $498 deposit) with a delivery date between February and April. As of now, all sizes are in stock, from extra small to large.

We have a sneaking suspicion that we’ll be seeing more than a few preeners using the status-y sweatshirt as street style bait come Fashion Week in February, despite its exorbitant price tag. Hey, that’s why credit cards were invented, right?

Would you pay $1,000 for Alexander Wang’s Parental Advisory sweatshirt? Let us know below!