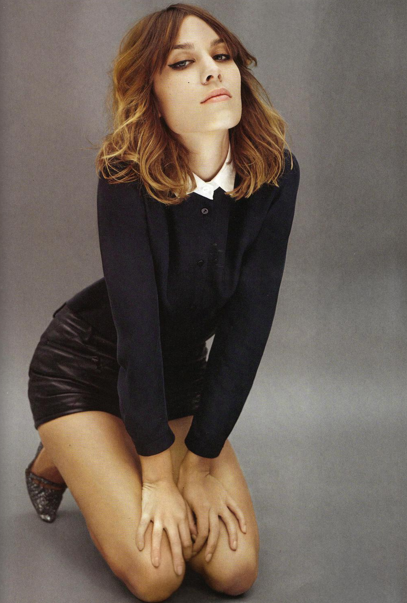 These days, Alexa Chung is the ultimate It girl—and it’s hard to remember a time when she wasn’t. But the 29-year-old Brit, who has made herself a household name thanks to modeling and TV presenting gigs (not to mention her endlessly covetable style), wasn’t always the toast of the town. In fact, she rose to the top like many other aspiring models: By putting herself in occasionally compromising positions.

While speaking with The Times, she noted that her parents didn’t provide much advice at the start of her career—because she didn’t really them about anything! “I actually kept modeling very separate. I never really asked my mum or my dad’s advice during that time and it actually felt like I didn’t want to tell them too much about the reality of what was going on—when I was taking the train to London and being asked to do certain things,” she said.

Chung elaborated on the “certain things” she was asked to do, stating, “I already knew it was wrong. So, you know, if there was a casting where some creepy man there had gone on to his flat in Ilford, and, you know, ‘Take your clothes off…’ and if I’d have done it, I won’t tell my mum because I know that’s wrong.” Although she admits to getting flashbacks once in awhile of those dark days, she’s more than happy to keep them completely in her past—and even though she wasn’t thrilled with herself at the time, those controversial castings paid off down the line.

This obviously isn’t the first account we’ve heard of a questionable situation when it comes to the fashion world, and even celebrated industry veterans like photographer Terry Richardson have been accused of objectifying models. However, this is definitely the first time Chung has spoken out about her rise to fame—and the bumps in the road along the way.

Chung likely elaborates more about her early days in the biz in her upcoming book It, set to hit stores on September 5.

What do you think of Chung dishing about the dark side of modeling?