Wishing them all the best. Alex Rodriguez didn’t mind Jennifer Lopez and Ben Affleck’s wedding. The former Yankees baseball player hung out with his boys during the wedding and sent well wishes to the bride and groom.

A source revealed to UsWeekly on July 18, 2022, that the Timberwolves owner is elated about his ex-fiancé’s marriage to Ben Affleck. “He’s happy for her and happy that she’s with the person she’s meant to be with,“ the source said. “He’s in a new relationship now and is happy as well. He’s traveling all over and living his best life. He’s really focused on family, his career and what he’s got going on.” The insider added, that A-Rod “saw the news” of the wedding and “went about his business.” “[His] relationship [with Jennifer] ended a while ago — he’s made peace with how things ended,” the source continued. “ He respects her and truly wishes her nothing but the best.”

When the marriage was announced on July 17, 2022, A-Rod posted pictures and videos of him on his Instagram story getting ready for a boy’s night with his Fox family. He posted videos of him doing his workout at UCLA and then proceeded to post a video of his work at Fox with David Ortiz. The duo was later seen having dinner with more of their guy friends at Mr. Chow in Beverly Hills, California. 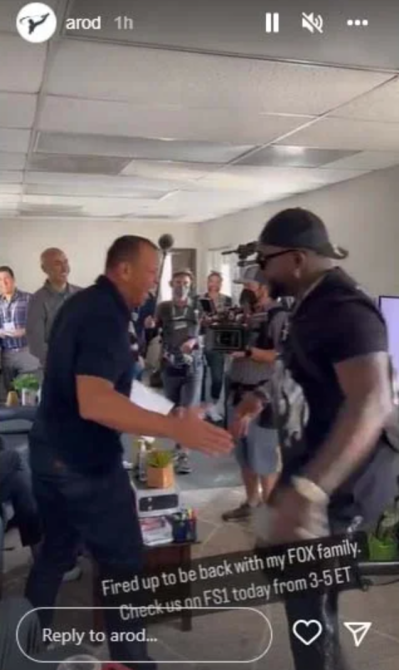 A-Rod’s ex Jennifer Lopez married Ben Affleck on July 17, 2022, in Las Vegas. J-Lo confirmed that she married Ben Affleck in Las Vegas in her newsletter OntheJLo. TMZ first reported the news when they obtained their marriage certificate from Clark County, Nevada. In her newsletter, she gushed about the decision to marry Ben in an intimate ceremony. “Last night we flew to Vegas, stood in line for a license with four other couples, all making the same journey to the wedding capital of the world,” she wrote.“

J-Lo and A-Rod were together from 2017 to 2021. The two announced their split in a joint statement on April 2021, “We have realized we are better as friends and look forward to remaining so,” they said. “We will continue to work together and support each other on our shared businesses and projects. We wish the best for each other and each other’s children.”

In a talk on Martha Stewart’s podcast on July 13, 2022, A-Rod had nothing but good things to talk about his relationship with Jennifer.“Here’s what I will tell you about Jennifer, and I was telling some of my colleagues here the other day, she’s the most talented human being I’ve ever been around,” he gushed. “Hardest worker. And I think she is the greatest live performer in the world today that’s alive.”

However, A-Rod seems to be doing fine with his new romance with fitness influencer Kathryne Padgett. News of the romance first broke in January 2022, per Us Weekly. The two were seen at a Timberwolves game together on May 25, 2022. Padgett posted photos of herself from the game on her Instagram, while A-Rod subsequently commented “🔥🔥🔥” on the post. An insider told Us Weekly on June 1, 2022, that the two “haven’t put a title on their relationship yet and aren’t going around telling their friends they’re official,” and that they have been “hanging out for the last few months.”