It’s a sweltering late afternoon in June and Alex Newell is struggling to put on his shoes. “Dear feet. You will not be swollen today,” Newell, 24, says as he squeezes his toes into a pair of lacey black Christian Louboutins in his trailer on New York City’s Upper West Side. “I’m an 11 in women’s. It’s not bad. Would I rather be an 8? Absolutely.”

After about 30 seconds of grunting and tugging, Newell is in. “Yes!” he yelps, as he slips in his heel. He trots to the mirror to admire his full look: red-bottomed Louboutins, a matching black lace choker, and an all-white suit. (He’ll add a silver and black wig later.) “This is a moment,” he says.

Newell has an affinity for shoes. It’s likely why he tried on three pairs before settling on the Louboutins as he glams for the 2017 Logo Trailblazer Honors red carpet later that night. It’s likely why he’s willing to withstand the pain (and bleeding) of the glittery silver pair of Aldo heels his stylist picked out for his opening performance—a violin-powered rendition of “True Colors,” alongside singers Hayley Kiyoko and Wrabel, in honor of Cyndi Lauper.

It’s also likely why he snuck into his mother’s closet at 10 years old (around the time he began having inklings of his sexuality) to try on her high heels, or why he auditioned for the role of Lola, a thigh-high boots-obsessed drag queen, on Broadway’s “Kinky Boots” four times. “I think the higher the heel, the closer to god,” Newell says.

There perhaps is nowhere closer to god than where Newell is right now at the Cathedral of Saint John the Divine, a Gothic upper Manhattan church, where Logo will film its show. Soon, the cathedral, a religious worship house-turned-pink-tinted gala, will be filled with hundreds of LGBTQ leaders—an irony Newell, a Catholic school alum, fully understands. “I love it. All the homos in one little church. It’s such an oxymoron,” Newell says. 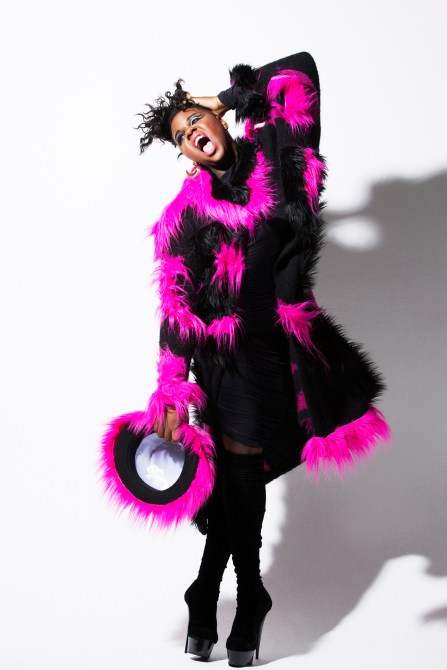 Born and raised in a town just north of Boston, Newell spent most of his childhood at Catholic school, where he was one of less than five black students. “I had my best Caucasian upbringing,” he says.

The only place he saw others that looked like him was at church, where Newell attended every Sunday since he was a toddler to sing in the choir. It was also where he would later develop conflicted feelings over the bible’s teachings.

Newell’s mother discovered his talent at age two after he wandered onto the stage at a state fair when his mother briefly turned around to fetch him a juice. “She started panicking, looking for me, and then she just heard my voice,” Newell says.

He later caught the performing bug at 11, when he saw a local theatre production of “Ain’t Misbehavin’,” an all-black Musical set in the Harlem Renaissance. “I would see Broadway shows that were on PBS and I would be in love with them, but I never saw anyone that looked like me,” he says.

It was a running theme: Newell was one of three black students in his high school—and with a high-pitched voice and natural sashay, he easily stuck out. Still, it wasn’t all tough. While his peers sorted through their own sexuality, Newell barely gave his a second thought. “Walking around the house in my mother’s heels, I was like, ‘I think that’s it, guys!’” he says,

At 17, on a whim, Newell came out to his mother by impulsively telling her right before bed. “I screamed it at my mother and she said, ‘Go to bed. I just took a Xanax,’” he says. “The next morning she was like, ‘I’m fine. Are you fine?’ And I was like, ‘I’m great! I love you.’”

But not everyone was so accepting. As word spread in his church, Newell caught the attention of his pastor, who pulled his mother aside to inform her that Newell’s sexuality was sinful. “He said the lifestyle that I chose goes against the bible,” Newell says. “Everyone who is a diehard Christian, they always use the bible against things they don’t like. But I’m pretty sure the bible says, ‘God is love.’ So if you can’t love someone else, aren’t you going against the bible?”

In his junior year, Newell applied for a regular role on “Glee” via a Myspace audition. Months later, he was selected to compete on a little-known show called “The Glee Project”—not quite the same, but if chosen, Newell would win a recurring role on “Glee.” Newell quickly agreed, taking a leave absence from high school and flying to Los Angeles that same week.

He eventually made it to the top four, losing out on the main role but still earning a two-episode consolation prize—a role that would later become a series regular and catapult him to national stardom.

In April 2012, about a year after “The Glee Project” ended, Newell made his “Glee” debut as Wade Adams, a shy off-stage, Sasha Fierce on-stage transgender student who would later go by “Unique.” By September 2013, Newell was promoted to series regular and earned widespread acclaim for portraying one of the first transgender high school students on television. “I was just in Denver last week at a nightclub and this trans male came up to me and he said that he wears his [surgical] scars proudly because of me,” Newell says. “It took everything in my body not to sob.”

Despite the praise, Newell is still a part of ongoing controversy regarding cisgender actors playing transgender characters. (In a viral Twitter thread, transgender actress Jen Richards explained that cisgender actors, specifically men, playing transgender characters is dangerous because it conveys to audiences that “being a trans women is just a man performing.”) It is a controversy Newell understands but also sees limitations to. “Everything’s a double-edged sword. I’m an actor, so at the end of the day, it’s whoever is best for the role. But I’m also a human,” he says. “I will say, since my character never fully transitioned, it kind of worked in a way. I myself may not be trans, but I am heavy on the gender-noncomforming.” 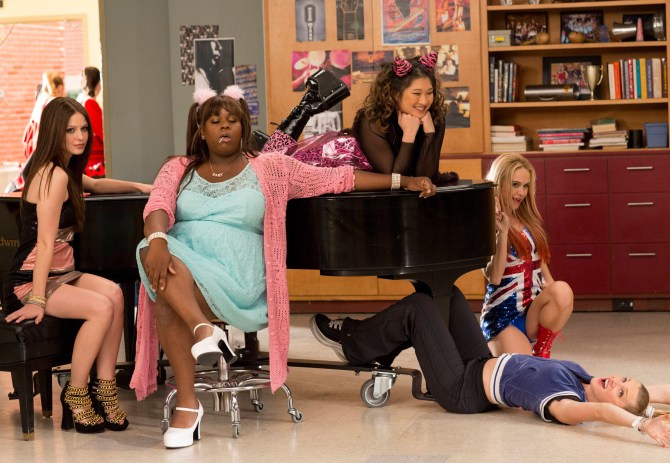 As “Glee” entered its final seasons, Newell was already looking ahead. While signing his last series regular deal, Newell was approached by Atlantic Records to release his own music. He jumped at the opportunity, debuting his first extended play, “POWER”—a Whitney Houston-esque catalogue—in 2016. Though it didn’t launch him into Beyonce’s stratosphere, Newell isn’t discouraged, with a new single out in August and another EP and album in the pipeline.

That level of confident optimism is likely what captured the attention of Adam Lambert in 2016 to bring Newell on his tour, or caught the eye of NBC that same year to greenlight “Imaginary Friend,” a comedy starring Newell in the lead role.

It’s also likely what got Newell in the audition room for “Kinky Boots.” In 2015, as “Kinky Boots”—a musical written and scored by Lauper about shoe entrepreneur and drag queen who partner to run a high heel company—was looking to replace its lead, Newell was called in for the role. He seemed to be hitting all the marks, until the director turned him down for his figure.

“They said my weight would inhibit me from playing the role, which is not true, but to each their own,” he says. “I was like, ‘This is a show where they’re encouraging you to be who you want to be. Don’t let them tell you who you should be.’ They literally looked me in the face and told me I was too big to play a role. There’s no limitation. My weight does not prescribe what I cannot do.”

The discrimination also followed Newell through his personal life where he would continually encounter relationship profiles preaching, “No fats. No femmes. No blacks.”

“We’re in a community where we want so much to be accepted yet we don’t accept each other,” Newell says. “We all suck the same dick, so why is it that you take it upon yourself to create some sort of alpha gay? The gay that is the ‘right’ kind of gay.”

Before he met his boyfriend, Newell admits he was never called “beautiful,” a term he’s still getting used to. “I was nothing like any of his 6’1”, white, blonde, blue-eyed, go-to-the-gym-nine-times-a-day boyfriends. I was like, ‘You do know that I’m 5’7”, I have thick thighs, and my hair is black, right?” Newell says. “I had the insecurities about it all the time. It was really hard to get out of that. But here I am. I’ve risen above it. He always said I was beautiful, regardless. It’s a hard thing to hear because no one else has said it.” 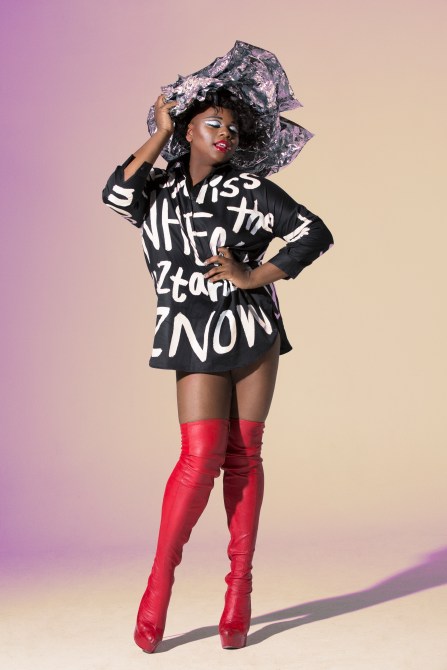 It’s about two hours before he takes the stage at the Logo Trailblazer Honors and Newell is whipping through a dark brick-lined alleyway in the back of the cathedral on his way to a last-minute dress rehearsal.

The train of his white floor-length robe grazes the ground as the stomping of his glittery stilettos echo against the cathedral walls. Audible YAAAS’s can be heard from stagehands who scoot aside as Newell, also dressed in satin silver jumpsuit, floats toward the stage.

During the rehearsal performance, Newell’s stylist, a woman with long blonde braids clutching a pair of brown leather flip flops, watches him from a table at the side of the stage. On his solo, Newell struts down, his stiletto-shackled feet following one after the other, as he belts “True Colors” to a heart-clutching audience.

At the end, Newell’s face drops. He turns to his stylist, gives her a death glare, and shakes his head.

She quickly rushes to him to swap his heels for flip flops. Even the most mold-breaking still have to break in their shoes.