Fans have been wanting to know more about Adele’s boyfriend ever since news broke that the singer is dating again. The good news is, we finally know who this mystery man is now that Adele and her beau are official.

So, who is the lucky guy? For those wondering (and let’s be real, that’s all of us), Adele’s boyfriend is Rich Paul, a big-time sports agent from Cleveland, Ohio. That’s right; the Grammy-winning Brit has officially found love across the pond in Paul! The pair made their first public outing in July 2021 while attending Game 5 of the NBA Finals, where the Milwaukee Bucks beat out the Phoenix Suns. Not long after making their appearance at the game, ESPN’s Brian Windhorst revealed during an episode of The Lowe Post podcast that Paul brought “his girlfriend to the game to sit next to LeBron.”

Three months later, Adele opened up about her relationship with Paul for the first time in an interview with Vogue UK. The star reflected on her first public outing with the sports agent in July, telling the publication, “I didn’t mean to go public with it. I just wanted to go to the game. I just love being around him. I just love it.” For more details about Adele’s boyfriend and their dating timeline, just keep on reading below. 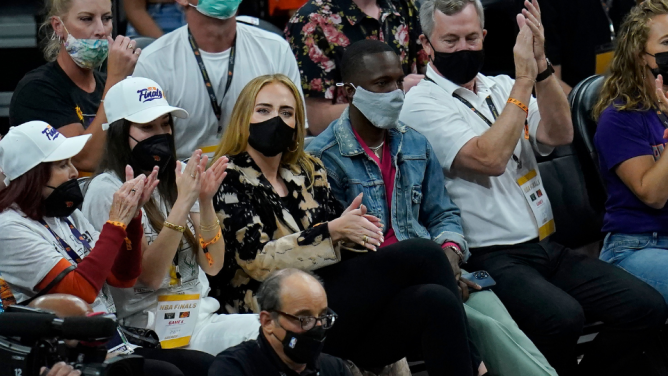 Rich Paul is a prominent sports agent, having represented the likes of LeBron James, Ben Simmons, Anthony Davis, Lonzo Ball, and many more throughout his career. The Ohio-based agent launched his own agency, Klutch Sports Group, in 2012, and has negotiated nearly $2 billion in deals for his clients since, according to a profile in The New Yorker released in May 2021.

Adele & Rich started dating at the beginning of 2021.

In his May 2021 profile for The New Yorker, Paul actually appeared to reference Adele during a conversation with LeBron’s longtime PR advisor, Adam Mendelsohn. “She was over yesterday,” Paul reportedly told Mendelsohn, eventually dropping “the name of a major pop star.” (AKA, Adele!) When Mendelsohn asked Paul what they were doing together, the sports agent simply replied, “Hanging out.”

“Why are you hanging out?” Mendelsohn reportedly asked. “Why not?” Paul replied, before adding with a laugh, “I’m not dating, I’m single. Put that in the story.”

While Adele and Paul may not have been on official terms back in May when the profile was published, a source confirmed to Page Six that they were “100 percent” together by July. According to a separate source who spoke to People after news of their NBA Finals date, the pair had officially been an item for “a few months” by then.

In October 2021, Adele herself confirmed that they started dating in the beginning of 2021 in an interview with Vogue. The “Set Fire to the Rain” singer revealed that they were friends for years, having met at a party a couple of years back. The singer introduced herself to Paul when she was “a bit drunk,” joking, “Do you want to sign me? I’m an athlete now.” The star gushed, “He’s just so f**ing funny. He was dancing. All the other guys were just sitting around. He was just dancing away.”

In November 2021, Adele appeared in Oprah Winfrey’s rose garden for a sit-down interview special. The special—which aired on CBS—also included a concert performance filmed at the Griffith Observatory in Los Angeles featuring the singer’s new music off of her fourth studio album, 30. Following the special (titled Adele One Night Only), Adele’s boyfriend Rich took to Instagram to share a series of behind-the-scenes photos with the singer. “Spelling Bee Champs with a touch of 🪐 🐐’s ❤️ 💫 #HowLuckyCanOneGuyBe,” Rich captioned the photos.

During her interview with Oprah, Adele gushed about her relationship with Rich. “He’s just hilarious,” she reiterated. “Oh, he’s so funny, he’s hilarious, yeah. And very smart. You know, he’s very, very smart. It’s quite incredible watching him do what he does.” The “Easy on Me” singer also noted that their relationship has been “very smooth” so far, explaining that it’s the first time that she’s ever truly “loved myself and been open to loving and being loved by someone else.”

“It’s just timing,” Adele told Oprah at the time. “But it’d be interesting to see what my reaction is like in general to anything that hurts me now that I feel so secure in myself, and I’m talking outside of romance as well.”

Adele’s boyfriend is also releasing his own memoir.

Paul isn’t just an expert at negotiating deals. The sports agent will soon be able to add “author” to his resume. In March 2021, The Hollywood Reporter revealed that Paul is writing his first memoir, Lucky Me. The memoir is set to be released by Jay-Z’s Roc Nation publishing division, Roc Lit 101.

“‘Lucky Me’ is more than my story,” Paul told THR at the time. “’Lucky Me’ is the story of every young black man who grew up like me. I want to use my story to uplift and inspire those who lived this and educate those who didn’t.” He added, “I cannot tell you what it means to partner with my friend and mentor Jay-Z on this project. ‘Lucky Me’ was the name of the book before I even spoke with Jay because his music was my life’s soundtrack.”