Fans counting on Adam Levine’s The Voice return shouldn’t get their hopes up. The former coach, 41, revealed his stance on the matter in a recent Q&A session over on his Instagram Stories in no uncertain terms.

When a fan asked the Maroon 5 frontman whether he would ever consider coming back to The Voice—the singing competition series where he served as a coach since the series’ debut for 16 seasons—Levine summed up his answer in three simple words: “No thank you,” he replied. Of course, the “Girls Like You” singer also took the opportunity to reflect on his relationship with his former Voice colleague and longstanding rival on the series, Blake Shelton, after a fan questioned whether he missed the country singer. “Blake who?” Levine joked, later adding, “Who is this Blake you speak of?” when another fan asked the Grammy winner to name his favorite album by Shelton.

Fans of The Voice know that Levine and Shelton’s friendly feud is just one of the many things to miss with Levine gone from the series. The Begin Again actor announced his exit from the series in May 2019, eight years after his debut on the show in 2011. While his exit has clearly left fans still wishing for his return, Levine has since revealed that his decision was for the best. 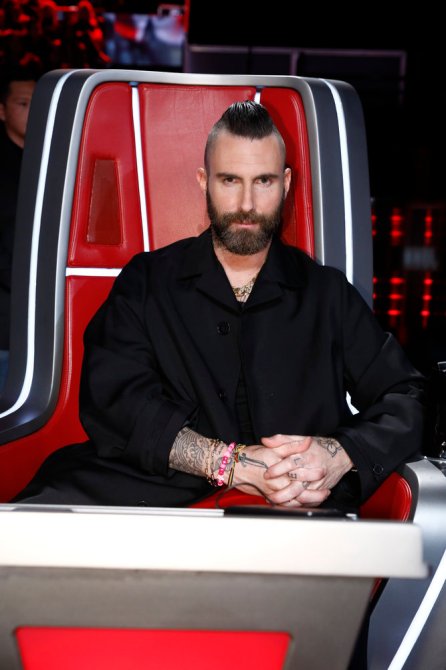 “I really do miss it,” he told Ellen DeGeneres during a September 2019 episode of her talk show. “I love the people that I met and worked with, and you all obviously know how I feel about Blake [Shelton],” he joked.

However, he went on to explain that despite how much he misses the series, his exit has given him more valuable time to spend with family. “I do miss it but I don’t miss how much I had to work. I was constantly working for so many years—very lucky, very fortunate, very blessed and all that,” he said, “but to just be able to stop in this moment to spend time with my new young family and just have the greatest time ever. Now I’m a stay-at-home dad. I just stay at home and do very little.”

These days, Levine is still enjoying life at home with his wife, Behati Prinsloo, with whom he shares two daughters, 4-year-old Dusty Rose and 2-year-old Gio Grace.