As one of Hollywood’s current heartthrobs, it’s no surprise that fans want to know about Adam Driver’s wife, Joanne Tucker, what their private marriage is like.

Adam, who was born on November 19, 1983, in San Diego, California, became a household name after his breakout role as Adam Sackler in HBO’s dramedy, Girls. He went on to star as Kylo Ren, the grandson of Darth Vader, in the Star Wars franchise before his first Oscar nomination in 2018’s BlacKkKlansman. He earned a second Oscar nomination a year later in 2019’s, A Marriage Story.

In an interview with The Hot Corn in 2019, Adam talked about how he brought his “personal life” into his role in A Marriage Story, in which he starred as Charlie Barber, a stage director going through a heated divorce. “You always bring your personal life to all of your roles, it’s just this one is maybe more relatable than something like Star Wars,” he said. “It’s less obvious how you bring your personal things to it but I don’t work on at any different, you still have to break up into million pieces and solve those things and not really worry about what it adds up to, but I don’t think you necessarily had to have gone through a divorce or been a child of divorce to play that part.”

He continued, “However, it definitely makes homework easier where I was that exact age when my parents split up so you can’t help but look at that and you project things. Then again that doesn’t necessarily mean it’ll be better because it’s not my job to have a feeling about what I’m doing rather it’s to convey a feeling for the audience. I don’t get so analytical about it, it just kind of comes up in the moment and then I forget about it.”

So who is Adam Driver’s wife, Joanne Tucker? Read on for what we know about Adam is married to and private details about his marriage he rarely shares. 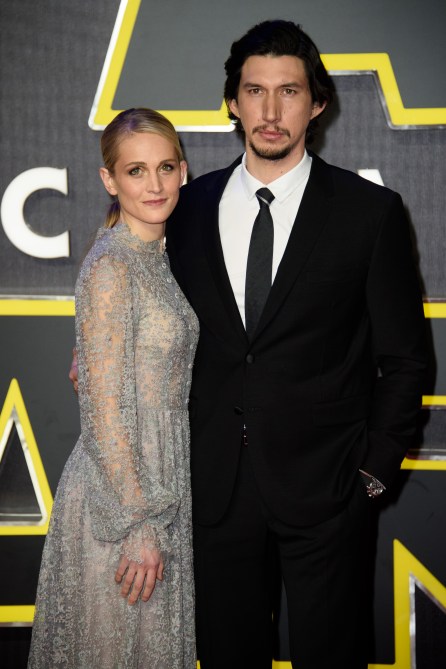 How did Adam Driver meet his wife?

How did Adam Driver meet his wife, Joanne Tucker? Adam and Joanne met while he was a student at the Juilliard School, a private performing arts conservatory in New York, which he graduated from in 2009. “She taught me what Gouda cheese is, and that you shouldn’t talk with your mouth full and spit on the sidewalk,” he told Broadway of the first time he met Joanne in a past interview.

Adam and Joanne got engaged in 2012 and married in 2013 in a secret wedding. Though there are no photos of the wedding, it’s rumored that Adam’s Girls co-star, Lena Dunham, and her then-boyfriend, Jack Antonoff, attended the ceremony. “They are very sweet together. They’ve been dating forever—years—and live together; [they’re] very comfortable and in love. She was with him before the Girls fame. They both love theatre and the arts. She respects him so much…Everyone on the show is very happy for them,” a source told Us Weekly at the time.

In 2016, Adam and Joanne welcomed their first child together, a son. “I look at my dog—this sounds so absurd—but it’s not — I don’t know if I can love anything more. Like, I have a kid, maybe—and be like, [gestures dismissively]. But the dog!” Adam told W magazine in 2017, revealing that he has a child.

Adam also confirmed that he has a child in an interview with Channing Tatum for their movie, Logan Lucky, in 2017. “I don’t have parties, because the world is a sad place and full of anger,” Adam said, to which Channing asked, “Can you imagine you’re just making martinis for your baby?” Adam joked back, “‘Stop crying. This is my party trick. You’ll have your time. This is me time now.’”

Adam spoke openly about his son for the first time in an interview with the New Yorker in 2019, where he compared the secret of his child to a “military operation.” “My job is to be a spy—to be in public and live life and have experience. But when you feel like you’re the focus, it’s really hard to do that,” he said. Back to his wife: Adam, Joanne, their son and their dog—a Rottweiler-Pitbull mix named Moose—live together in the Brooklyn Heights neighborhood of New York City.

Who is Adam Driver’s wife?

So who is Adam Driver’s wife, Joanne Tucker? Well, like Adam, Joanne is also an actor. After they graduated from Julliard together, Adam and Joanne founded Arts in the Armed Force, a non-profit arts programming organization for individuals in the army. Joanne serves as the Art Director of the foundation.

While Joanne hasn’t starred in any blockbusters like House of Gucci or Star Wars: The Last Jedi like Adam, she has had a successful acting career. In 2011, Joanne made her on-screen debut in the movie, Loft. She went on to star in other films like 2019’s The Report and 2020’s Give or Take. Joanne also made a cameo in season 5 of Girls in a scene with Adam and Lena. Around a decade ago, Adam and Joanne also made a short film titled The Basement together.

While they haven’t been photographed together much, Adam has walked the red carpet at several award shows and movie premieres with his wife, including the 2019 BAFTA Awards, the 2016 Cannes Film Festival and the 2020 Oscars. Adam, Joanne and their son were also photographed in Italy (with their dog, Moose) enjoying ice cream as he was filming House of Gucci in 2020.