As the contestant who received Matt James’ First Impression Rose, it’s no secret that a lot of fans want to know The Bachelor 2021 spoilers about Abigail Heringer.

Abigail is one of 32 contestants who met Matt, a 29-year-old real estate agent from Raleigh, North Carolina, on the Monday, January 4, premiere of The Bachelor season 25. Matt, who is the best friend and roommate of Bachelorette alum Tyler Cameron, was announced as the season 25 Bachelor in June 2020. Unlike the previous Bachelors, Matt is the first Bachelor since Brad Womack in 2011 to not be a former Bachelorette contestant. (Though he was cast for Clare Crawley’s season of The Bachelorette in 2020, he never made it on the show, as he was chosen as the Bachelor soon after.)

As viewers know, Abigail got Matt’s First Impression Rose on night one, but does she win? Well, we talk about that later, but what we can say now is that Reality Steve revealed Matt’s Bachelor 2021 winner before his season even premiered, and producers are “livid.” “Everyone on the show has been reminded that they signed non-disclosure-agreements,” the source told OK! magazine in January 2021. “The show’s PR department strategically leaks information and teases each season to get publicity and viewers excited. However, the number of unauthorized leaks has gotten out of control. To have the winner leaked before the first episode even airs is terrible. Producers are livid,” the source adds. 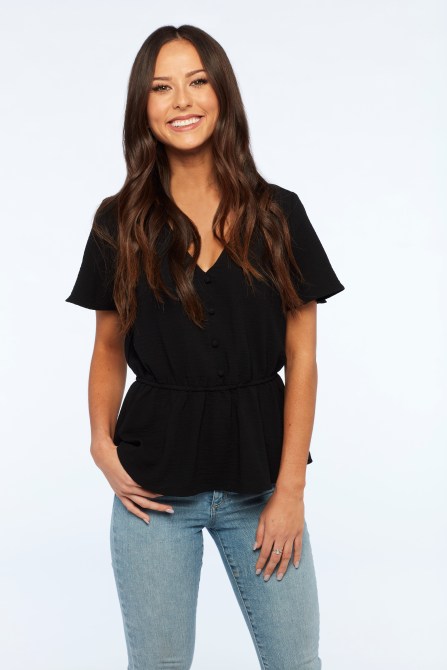 Abigail is a 25-year-old from Beaverton, Oregon. Abigail and her sister, Rachel, were both born with congenital hearing loss. In an interview with Statesman, Abigail’s mom, Suzie, revealed that Abigail underwent cochlear implant surgery at the Oregon Health & Science University when she was 2 years old. Chris Harrison confirmed that Abigail is the first hearing-impaired contestant on any Bachelor franchise show.

“Abigail is a beautiful soul from the Pacific Northwest who says that nothing makes her happier than enjoying a cold local microbrew on a beautiful Oregon day,” reads Abigail’s Bachelor bio on ABC. “Having a hearing impairment never stopped Abigail from living her life to the fullest. She loves being outdoors, and when she’s not working, she loves to spend time with family whom she says bring out the best side of her. Abigail is easygoing, laid-back, always down to have fun and ready to find the man of her of her dreams.”

Her bio continues, “She says she is looking for a man who will lift her up and make her feel like it’s just the two of them in the whole wide world. Good looks are definitely a plus, but Abigail says that getting to know someone on a deeper level is far more important in a successful relationship. Abigail says she doesn’t believe in love at first sight, but we’ll see if that holds up after she meets Matt!”

For her fun facts, Abigail lists the following:

– Abigail loves to spend her free time golfing with her grandparents.

What is Abigail’s job?

Abigail is a client financial manager. According to her Linkedin, Abigail works as a client financial analyst at the Opus Agency. She graduated from Linfield College in McMinnville, Oregon, in 2017 with a bachelor of science in finance. (Matt also works in finance, so the two of them have that in common.) While in college, Abigail was a part of Alpha Phi and the women’s golf team. She graduated from South Salem High School in 2013, where she was also a part of the women’s golf team, as well as the National Honor Society. Before her job at Opus, Abigail worked as a real estate valuations analyst at The Holt Group and at various roles at RVK, Inc in Portland, Oregon.

Does Abigail win The Bachelor?

So what happened to Abigail? On the February 15 episode, Abigail was eliminated on a group date with Matt after she questioned their connection. Abigail had a serious conversation with Matt about their relationship after he invited Jessenia instead of her for the last one-on-one date before Hometown Dates. After their conversation, Matt realized that his connection with the other women was stronger than with Abigail, which led him to send her home.

Is Abigail still single after The Bachelor?

In an Instagram post after her elimination, Abigail confirmed that she was sent home and will not not return to Matt’s season, despite Reality Steve’s claims that she was sent home in fifth place not eighth. “Annnd that’s a wrap! 👏🏼 When I first signed up to meet Matt, I never expected for my experience to go the way it did,” she wrote. “While I didn’t get what I originally came for, I didn’t walk away empty handed. From the amazing friendships I made with such a strong group of women to my new sense of confidence with myself and my hearing loss, my heart is so full!!”

She continued, “It was a pleasure to share my story and to raise awareness of the deaf & HoH community. 💙 Lastly – I want to say thank you to everyone that supported me through this whirlwind experience!! Especially my friends and family, I’m so lucky to have such an amazing support system.”

Abigail didn’t reveal if she’s still single or not after Matt’s season, but from her Instagram post, there are no clues that she’s in another serious relationship after The Bachelor. As the search for the season 17 Bachelorette is under way, there are many fans who want to see Abigail find love again on the Bachelor franchise, which means she will have to be single if she is chosen as the next Bachelorette. “Abigail for Bachelorette,” read a comment with more than 3,000 likes .Another comment read, “You are the whole package girl ABIGAIL FOR BACHELORETTE.” One more account wrote, “You’re such a light! We need more of you #abigailforbachelorette ❤️”

Chris Harrison also seems to be supportive of Abigail as the next Bachelorette, as seen in his description of her before the season aired. “Abigail is one of our favorites. This is an absolute gem of a woman, impossible not to fall in love with,” Chris said in a YouTube video in December 2020. “Abigail has an incredible story; she’s the first hearing-impaired person we’ve ever had on the show. [She] is just beautiful and sincere, the true definition of someone here for the right reasons.”