Friendly exes—or something more? Days after their split, Aaron and Shailene were reportedly spotted out on a casual breakfast date together. The sudden sighting has fans asking the same question: Are Aaron Rodgers and Shailene Woodley still together?

News of Aaron and Shailene’s split first broke on February 16, 2022—a year after the pair first announced their engagement. According to a source who spoke to People at the time, the couple’s breakup was “amicable” and for the best. “They’re very different people with busy careers and there were obstacles that they couldn’t surmount,” the source said. “They will remain friendly; there’s no bad blood and no drama. It just didn’t work out for them.”

Since then, however, Aaron has sparked some confusion about their real relationship status. In the days following reports of their breakup, the Green Bay Packers quarterback took to Instagram to profess his “love” for the Big Little Lies alum before referring to Shailene as his “amazing partner” in a later interview. Now, a public sighting has more fans scratching their heads.

On February 22, 2022, the duo were spotted grabbing breakfast together at Erewhon Market in Los Angeles. According to a source who spoke to E! News at the time, “they came to the cafe for breakfast and just sat outside at a table together,” though they didn’t “hang out too long.”

So, are Aaron and Shailene still together? Or are they just friends after their reported split? Here’s what we know so far.

Are Aaron Rodgers and Shailene Woodley still together? 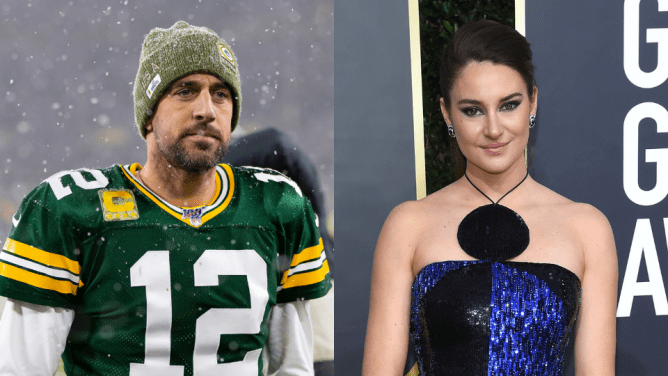 Since their split first made headlines, multiple sites have claimed that the pair officially called it quits—but Aaron and Shailene have yet to confirm or deny these reports. Aaron, however, has seemingly hinted on social media and in interviews that he and the Divergent actress are still together.

During an interview with “The Pat McAfee Show” on February 22, 2022, the NFL MVP seemed to speak about his relationship with Shailene in the present tense, noting, “I’ve been with you two years, won two MVPs—that’s not a coincidence either.” He also gushed about the actress, telling host Pat McAfee that she’s an “incredible woman, talented smart, kind,” who “taught me what unconditional love looks like and that’s a great gift.” At another point in the interview, he explained, “When your home life is stable and you have an amazing partner to do life with, it just makes the work-life a bonus, and it changes your perspective because you’re able to not look at work as, like, a refuge.”

Days before his interview, Aaron also took to Instagram to say “I love you” to Shailene in a lengthy post. “Thanks for letting me chase after you the first couple months after we met, and finally letting me catch up to you and be a part of your life,” Aaron wrote at the time. “Thanks for always having my back, for the incredible kindness you show me and everyone you meet, and for showing me what unconditional love looks like, I love you and am grateful for you.”

Shailene, for her part, has yet to drop any clues about her real relationship status with Aaron. For now, however, it looks like the pair are on good terms whether they’re still together or not.