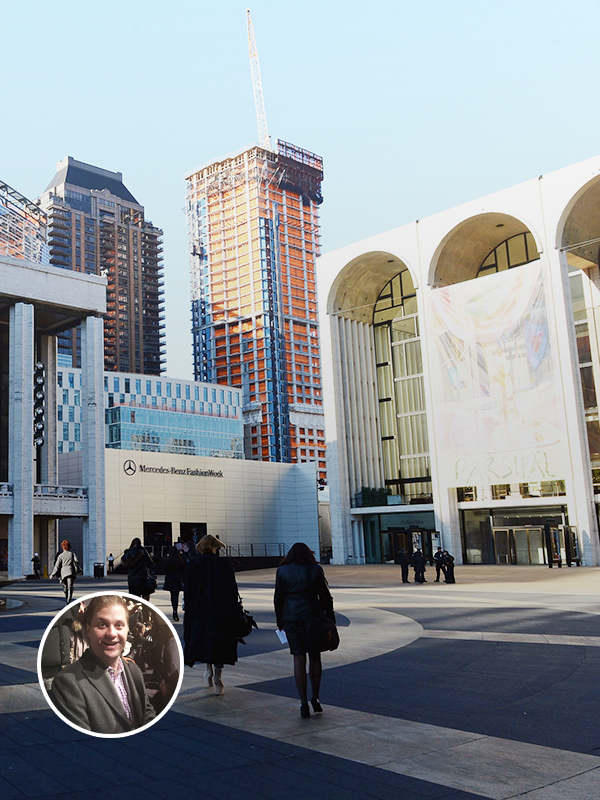 It’s easy to get jaded by the Fashion Week hubbub, so we’re always looking for ways to see the collections (and the week’s events) through fresh eyes. In our Ask a Real Person series, we ask folks outside the fashion bubble for their take on things, looking at Fashion Week through an entirely “real” perspective.

This season, we recruited a regular guy—specifically, the affable VP of East Coast Sales for StyleCaster’s parent company, SheKnows, Zach Alter—and sent him to the Lincoln Center tents to experience the chaos of a Fashion Week show. His take on the week surprised us—not only because it was absolutely spot-on, but also because it was far more optimistic than the “ugh Fashion Week is exhausting” discussions we’re seem to hear constantly from industry stalwarts. Read on for a non-fashion person’s take on the scene, as told to Laurel Pinson.

I wore what I would normally wear, but then I realized I probably needed to, like, spruce it up a little bit. So that’s where the jacket and pocket square came from. (Also, I asked my fiancé and she told me.)

I knew to block off an hour in my schedule (Ed note: This was one of the few questions leading up to the experience that we agreed to answer), so I figured the show would last an hour.

But you quickly learn when they don’t let you into the room until five minutes ’til showtime—and then once you walk in, there’s only seven other people there—that oh this isn’t going to start on time. I was like, Oh, okay so it’s a “fashionable” start time.

I really had no idea what to expect of the scene at the tents. I walked there, and the the first thing I saw were these two women—they looked very similar, maybe sisters, maybe even twins—with long blonde hair, and big, shaggy fur jackets. They were taking selfies, like a block away from Lincoln Center. They were the type of people that, say, if you go to a resort for a week, you see four times a day. I saw those women 17 times in the next hour and half, I don’t know why. That was the first thing I saw, and I was like oh boy.

The plaza outside wasn’t all that crazy. Once you get inside—the sort of “expo area,” I guess—there are people taking pictures by the cars, which was funny because there as this model-y-looking woman taking a picture by the car, and I thought she was a model who had been paid to take pictures, but it was just someone who had walked up there and was giving her best model face by the cars. Once you got into the actual show, things were much calmer. Everything going around it was a little bit like a zoo.

Getting into the show is kind of like going into a stadium—just scan and go. Then, once you get in, there are people to direct dunces like me to our seats.

Overall, I definitely expected the show to be longer. I don’t know why, I suppose. The clothes were not as alien-like as I was expecting. Sure, some of the outfits were like uhhhh, but most of the clothes were like, Wow, that’s normal—that’s a sweater. Or, That’s a jacket I could purchase for somebody and they’d be able to wear—not, say, a costume from Star Wars.

I think, in a lot of ways, fashion takes itself too seriously. Even like the models—it’s like, Smile, you’re on a runway at Fashion Week. I know they aren’t taught to smile, they aren’t allowed to smile. I know it’s not them. But, smile, right?

Overall, it seemed that everybody there was less pretentious and stuffy than I’d thought. Generally, the attitude was more welcoming. But it was a bit like going to a “Harry Potter” movie, where everybody dresses up for the movie.

The show is not just want goes on inside one room—the show is everything around you. And it’s not as stuff or judge-y as I’d imagined—I didn’t feel judged because I’m not, like, the best dressed. It really felt like everyone was just doing their own thing. Fashion is really the epitome of individualism—people dress how they want and they own it. As long as you own it, you pull it off.

My experience in a word? “Selfies.”