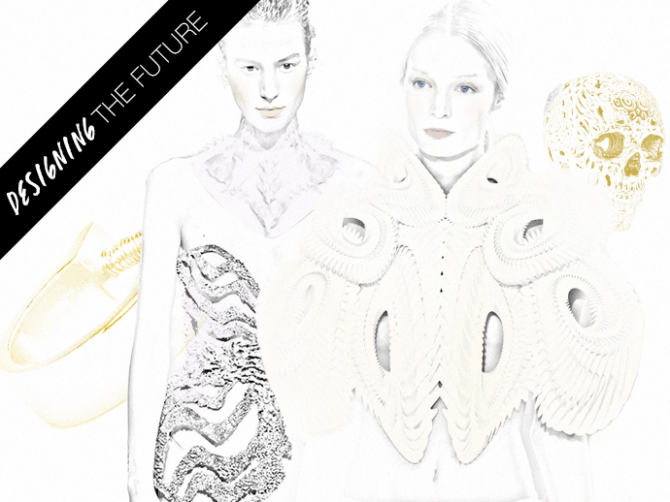 By now, you’ve probably heard at least a little about a new phenomenon called 3D printing, and the potentially large role in could play in the fashion industry and its manufacturing processes. That said, you might feel—as we did—that you still don’t really understand exactly what it is.

Here’s how it works: In it’s most basic form, 3D printing takes a digital blueprint of an object—say, a bracelet—and turns it into a real-life object by “printing” it in materials as varied as plastic and metal.

Amazing right? Well, some people in the fashion world have raised questions about whether being able to print whatever we want is necessarily a good thing—especially when it comes to an industry like fashion that values craft, luxury, and uniqueness.

According to Carine Carmy, the marketing director at Shapeways, one of the first 3D printing companies, the ability to create pieces using this new technology is hands-down a good thing, because it will enable people to be creative and entrepreneurial without the usual bars to entry—namely, a whole lot of money and connections.

“If you’re giving a tool to people they didn’t otherwise have, you’ll enable a person who would never otherwise have [an] opportunity to really express their creativity,” Carmy told us.”That’s the future of the fashion entrepreneur and the small business—you don’t have to invest a lot up front, and you don’t have to have connections with [designers] in the fashion district. It’s very similar to how fashion bloggers have blown up.” 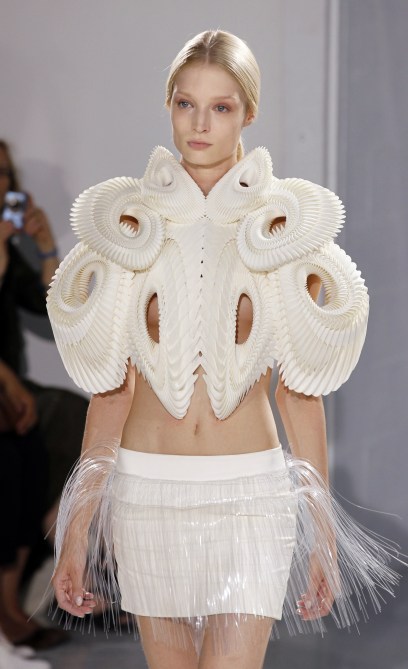 A design from Iris Van Derpen’s 2011 Couture collection, the first time 3D printing was seen on the runway

Carine is the first to point out that technology can’t serve as a replacement for talent; just because people have access to a new tool that gives them the ability to bring their ideas to life doesn’t mean said people have any design ability.

“The design process can’t be overlooked,” she says. “People forget [that the ideas come from people, not machines]. I think the handmade movement is really important and I don’t discredit it because it has enabled so many young designers to make a business around their skills. But [it’s very difficult to] scale that. You either hire more and more people to do the work, or you just get stalled and you say, ‘This is the limit.’ We are ultimately enabling designers to do what they do best, which is design.”

To that end, Carine points out, 3D printing is giving talented designers the ability to customize their work to an extent never seen before, even in haute couture, which ups the value of each product in both the eyes of the creator and his consumer.

“When you want something 3D printed, it’s not made until you order it,” Carine says. “Every time the machine prints it, there’s always a slight change. And depending on who’s doing it, there’s always a little bit of a uniqueness to it. It goes back to the whole notion of couture: one-of-a-kind is really the core of our business today, and really helping people get products that are unique and hard to find, that really meet their needs. We call it mass customization, instead of mass manufacturing.”

She points out a few examples of extreme customization: a bracelet whose shape changes based on a sound wave you submit to the machine, an app that takes your personal Facebook data and builds miniature toys based on it, completely customizable cuff links, and more.

“3D printing lets the designer still maintain their design aesthetic,” Carine told us. “They are still able to define the scope of the work, but the buyer can tweak it to fit their size perfectly, for example. We’re really opening up co-creation in a way that was never possible before. I don’t think these things are going to replace the work of high fashion designers or couture, but it will give us a new tool with which we can think about how to bring ideas to life.”

Although we do think it’s cool that we can have a completely one-of-a-kind bracelet designed in the shape of a one-time-only sound wave, as fashion lovers we maintain that there is still no replacement for a hand-crafted haute couture creation that took hundreds of hours to sew and piece together. No machine can compete with that, and we doubt that’s going to change much in the future.

When the idea for 3D printing was first being developed, most machines only used a special type of plastic that was easily melted and re-formed into various shapes. Now, Carine says, while more and more materials are being used everyday, there’s still a long way to go before actual, flowing fabrics are able to be printed with the machines.

“We just launched gold-plated brass, which is being used for jewelry,” Carine says. “All these new materials are being used for 3D printing. I would love to see it move in the direction of fabrics, but I think the materials are currently a bit far out for that. We can’t do mixed-materials printing today. If you were able to do mixed materials and innovative powders, you would start to see more clothing and fabric. Mary Haung did a bikini that was 3D printed, and she used the same material we use for iPhone cases—a really flexible plastic. And [the] Dita von Teese dress (shown above) was the same kind of base material.”

For centuries, fashion in its purest form was only available to the upper classes, who wanted made-to-order clothing and apparel that no one else had access to. The rest of society mostly wore their work clothes and their home clothes—elaborate designs were reserved only for the wealthy few.

In may ways, fashion’s longstanding top-down dynamic holds to this day, which is why brands like Chanel, Louis Vuitton, and Christian Louboutin remain more coveted than the mass retailers you find in every mall in America. Granted, high fashion and fast fashion are more connected than they’ve ever been, with high-end designers like Margiela, Versace, and Lanvin teaming up with mass retail stores like H&M,  but it’s the demand for access to this exclusive world of high-end design that persists, and drives the success of the collaborations.

While it’s likely to be a long time before we see a 3D-printed dress that’s as in-demand (or worth as much, to be honest) as a haute couture creation from Christian Dior, what’s more immediately on the horizon is the ability to increase customization—i.e., the implementation of haute couture-inspired designs—in everyday wear like jewelry and other accessories, all courtesy of 3D printing.

MORE COUTURE ON STYLECASTER:
The 10 Most Bizarre Looks From Paris Couture Week
The Highlights From The Chanel Couture Show