Menswear for women is not a new or hot topic. It’s become increasingly mainstream, and frankly, I’m not mad about it (all clothes should be gender neutral!!). More and more frequently, we’ve see celebrities ditching dresses and gowns for jumpsuits and pantsuits—both on and off the red carpet. Following in the footsteps of this movement is the latest 2019 fashion trend to strike the zeitgeist: suits without shirts.

Certain celebrities can pull off anything, be it a dress that looks like a Sesame Street costume or pants that are so long they literally drag on the floor. But when there’s an ensemble that every celebrity looks hot AF in, I will notice. In this case, that look is pantsuits with no shirt underneath. It doesn’t matter what style of suit, how baggy the jacket or blazer, or the even the color of the thing. Every celebrity I’ve seen sporting this look has looked so good I want to cry.

OK, so, here’s the deal: I first noticed a pattern when Lucy Hale posted several photos of herself clad in various suits starting in December 2018. (I sound like a private investigator looking for hot celebrities, but, like, it’s fine.) While one of the suits did, indeed, have a shirt underneath, one white pantsuit did not, and my journey to unpack this trend began.

Since then, I’ve noticed countless celebs sporting the suit-without-shirt trend—all in different ways. Within the last week, four particularly hot shirtless suit ensembles entered my radar. The first was Shay Mitchell wearing a Kheir Sannai suit in Los Angeles. She looked amazing, obviously, and I bookmarked the ensemble for my files (in a really non-creepy, Pinterest kind of way).

Next, model Emily Ratajkowski tried her hand at the look in a pinstripe suit ensemble I feel truly blessed to have seen.

On Wednesday, Rita Ora stepped out in not one, but two suits sans shirt. Wearing two hot-ass suit looks in one day is an accomplishment bigger than when I won first place for handwriting in second grade. (It was a big deal at the time, OK?) 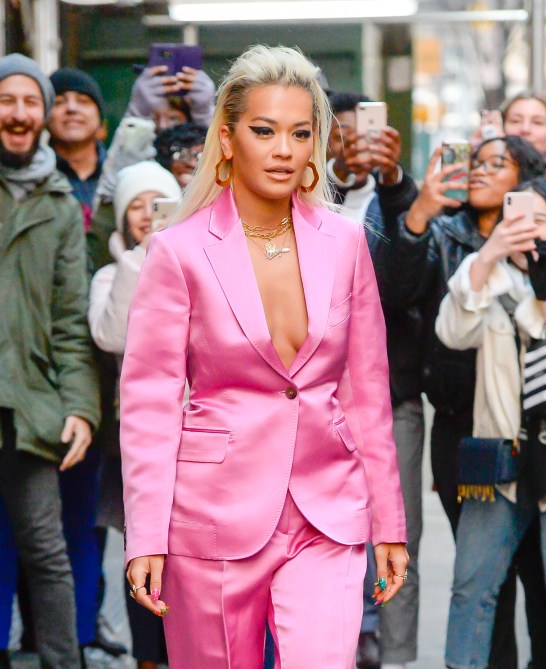 That takes us to Thursday, where my High School Musical idol, Vanessa Hudgens, rocked a striped shirtless pantsuit all night long. I thought Troy Bolton was my fairytale, but it was really Gabriella Montez all along. 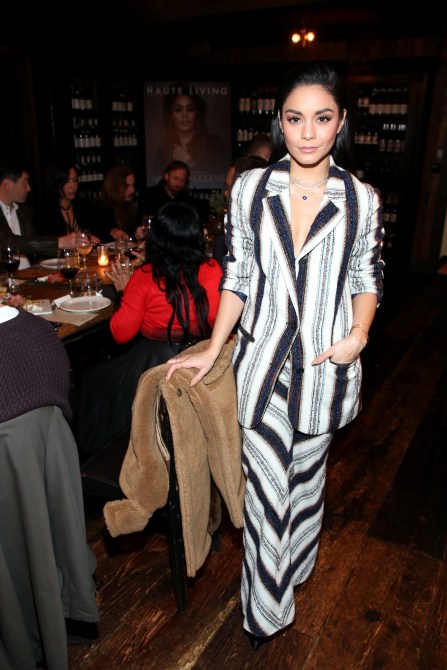 As I said earlier, most of these shirtless suit looks were just in the last week. Suits without shirts is quickly becoming the most noticeable trend of 2019, and I am seated happily on the bandwagon.