If there’s one thing you learn today ladies, let it be this: The way girls flirt is like a sport. How? Because it takes a while to properly develop the skills needed to master the art.

Men are confusing creatures and oftentimes miss the subtle signs we put forth when we’re trying to tell a dude we like them. If you don’t make the opposite sex aware that you’re flirting, theres a good chance they’ll have no idea. That said, here are 10 ways girls flirt that men don’t notice—which means you might have to be a little more forthright if you want to catch that cute guy’s eye for good. 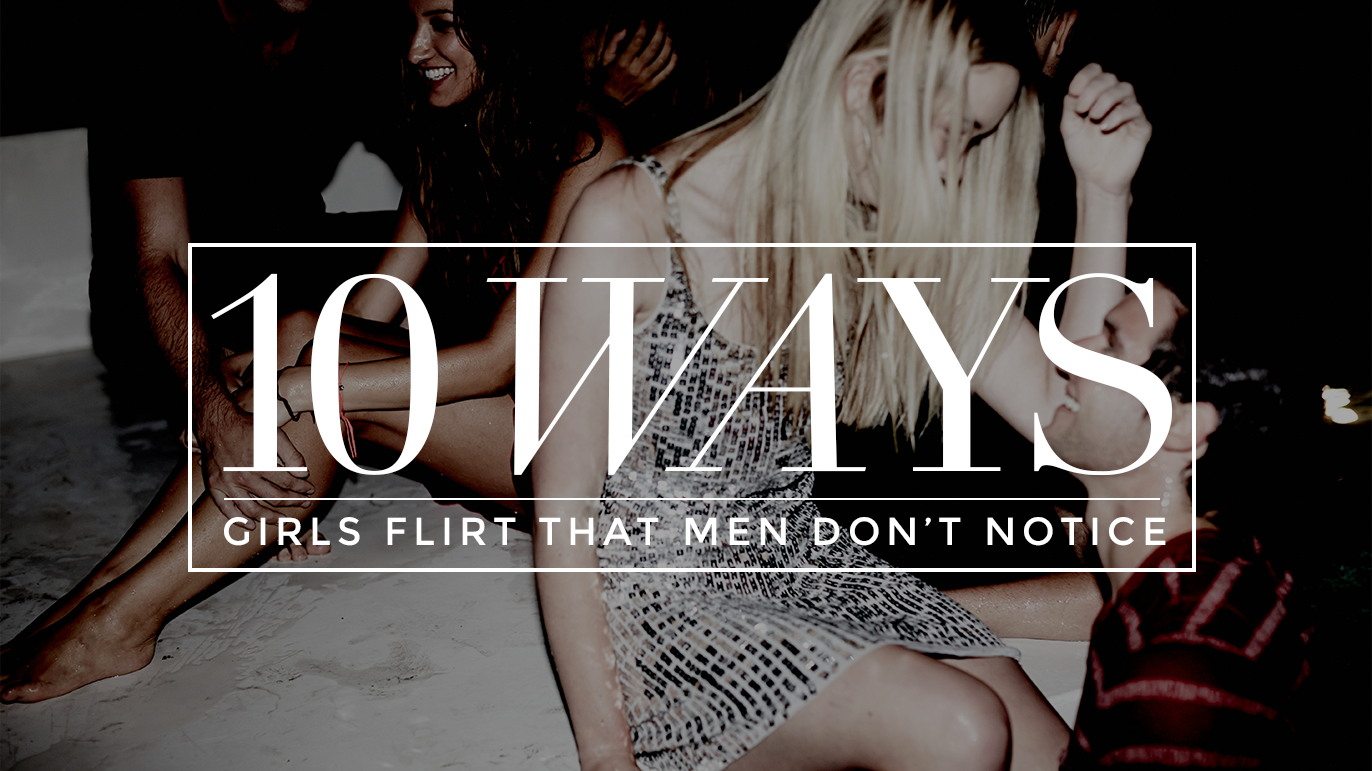 1. Crossing your legs
Body language is difficult for some men to understand. One would think that crossing and uncrossing your legs is a pretty obvious flirting method—especially if you’re wearing a pair of high heels or a thigh-grazing skirt—but it’s a move that can easily be overlooked by guys.
Try this instead: Make light body contact. For example: Casually touch his arm while you’re talking, or playfully tap his shoulder if he makes a funny joke.

2. Twisting and flipping your hair
Women always seem to think that constantly twisting and flipping their hair makes them seem like they’re flirting, but it usually just come across as a nervous twitchy habit—not sexy.
Try this instead: Instead of maniacally tossing your hair around, style your locks in such a way that a few strands fall toward your eye, or try rocking some seriously sexy beach waves or a messy loose braid. Think about the hairstyles you feel most confident rocking and go with that. Odds are, it’ll translate.

3. Freshening up every five minutes
Guess what? If you dash to the bathroom to brush your hair or reapply your lipstick every five minutes, guys won’t notice.
Try this instead: Put as much effort into your appearance as you want before you meet them, but focus your energy on making great conversation instead of worrying about how you look.

4. Winking
Okay, it might seem cliché, but some women still might think winking is sexy. If you wink at a man, he might think you have a tick.
Try this instead: Make great eye contact while talking to him. It’s sexy, smart, and shows you’re really listening.

5. Laughing at everything he says
Laughing can be a great way to flirt—when things are genuinely funny. But if you’re speaking to a man and you laugh at everything he says, you’ll confuse him and come off looking a little ditzy—or nuts.
Try this instead: Smile often (nobody likes a sullen date) and laugh when you truly find something he says funny—not when you think you should be laughing.

6. Trying to make him jealous
One terrible way to flirt with someone is to try to make them jealous by mentioning ex-boyfriends, your dating history, or a list of guys that want to date you. If you get the urge, step up your game and act your age.
Try this instead: Highlight some recent personal or professional achievements you’re proud of. He’ll be way more impressed that way.

7. Complimenting him a gazillion times
Compliments are like alcohol: Fine in moderation but disastrous in excess. You can certainly say a few nice things but you don’t need to tell him how hot he is 400 times, or how totes amaze he is on the second date.
Try this instead: Tell him you like the way that shirt looks on him, how cool his sneakers are, or—if he cooked you dinner—compliment his skills in the kitchen. If you enjoyed meeting him, or hanging out, say that too.

8. Facebook flirting
In today’s day and age, Facebook has become a legit way to meet people. However, sending a guy you barely know flirty messages can be considered desperate or stalkerish.
Try this instead: If you see a cute guy on Facebook, see if you have any mutual friends and reach out to them for an introduction.

9. Chomping on your gum
Chewing gum isn’t sexy. Enough said.
Try this instead: Chew that gum before you go out to freshen your breath.

10. The goodnight text
Sending someone you’ve just met (or are casually dating) a goodnight text can come off as needy (as can “OMG LOOOOOVED meeting you, ur so amazing can’t wait to see again!!!!! xooxox”) Sending these types of texts could cause guys to view you as a typical “girl” instead of thinking you’re slyly flirting with them.
Try this instead: Don’t text a guy goodnight until you’ve been on two solid dates and know you’re going out again.

Okay ladies, now you’re clued into some techniques that men likely don’t consider flirting. So, don’t waste your time sending out the wrong signals—get out there and use the above tips to show him you’re into him. Good luck!

What do you think of these tips? True or not? Let us know in the comments below!